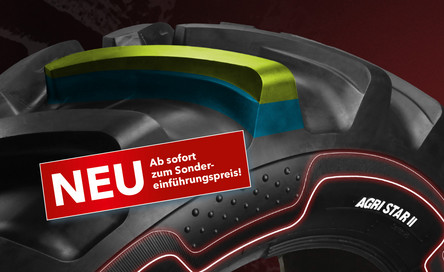 While other tyres’ traction  diminishes with increasing service life, the stratified layer technology keeps the AGRI STAR II in shape permanently. Each lug has two levels, each with its own tread. As soon as the cover layer has been removed after around 40 percent tread wear, the features of the second lug area take effect. The modified geometry provides fresh traction for the rest of its service life - "as if it were a completely new tyre," says Alliance, describing the Alliance AGRI STAR II’s self-rejuvenating properties.

The tyre’s increased rubber volume in the centre and the improved tyre stiffness, together with the special design of the studs, also ensure high comfort, impressive stability and grip on the road as well as improved slip and breaking strength. The speed index D also exceeds the standard for radial tractor tyres.

The Agri Star II is further characterised by the tyre’s wide shoulders, which equally well, protect both soil and plants in the field and pasture. Stubble protection helps in preventing the tyre from damage and the polyester carcass keeps the tyre in shape even after overheating during the most challenging working conditions. Both features also contribute to the tyre's exceptional durability, with SLT lugs having very effective self-cleaning properties.

"With the AGRI STAR II, Alliance has developed a product which sets standards in the field of standard tyres. The tyre is closely geared to the requirements and wishes of farmers and dealers and offers the right solutions", Heiko Holthaus, Head of the Agricultural Division at Bohnenkamp AG, is pleased to announce the new AGRI STAR II, which is being launched in 76 sizes in the 70 and 85 series as well as in specific sizes and load indices.

But the new model is also appealling to the eye. In designing the AGRI STAR II’s flanks, the developers were inspired by water and the earth, and in their implementation, they underline the relationship between modern tractors and the land - while the lugs, developed with innovative stratified layer technology, raise the bar for performance in the field.

To the Alliance AGRI STAR II in the shop