749.5 kWp cover 25 to 30 percent of its own energy demand
Bohnenkamp AG has commissioned the largest and most powerful photovoltaic system in Osnabrück. 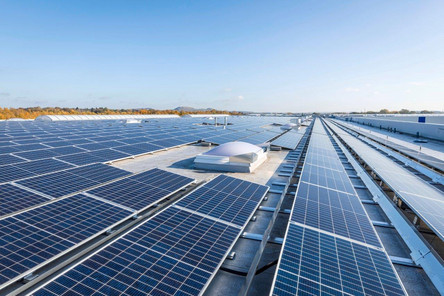 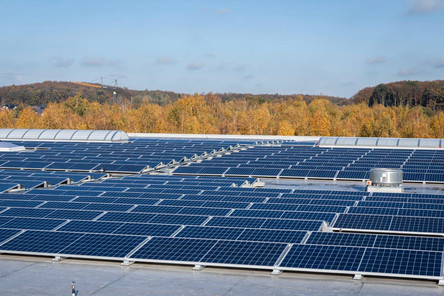 Michael Rieken, member of the board of directors of Bohnenkamp AG, presented the new system together with Mayor Wolfgang Griesert, Alexander Gutsch, sales manager of Goldbeck Solar, as well as Detlef Gerds and Ute Fritsch-Riepe from the city of Osnabrück’s Environmental and Climate Protection Department.

A total of 2,082 solar modules with a total output of around 750 kWp have been installed on the roof of Bohnenkamp AG’s logistics halls in the Atter industrial estate in recent months. This output is sufficient to cover around 25 to 30 percent of the company's total energy requirements. Mayor Wolfgang Griesert commented: "The new system is currently the most powerful photovoltaic system in the city of Osnabrück. The concept implemented by Bohnenkamp shows that sustainability and economic efficiency go hand in hand very effectively, thus sending out an important signal. We would like to see more companies in Osnabrück go down this path."

In addition to a sustainable solution for the environment, Bohnenkamp also focused on economic profitability during the planning phase. The total investment of around 700,000 euros is expected to pay for itself after around eight years with a planned operating time of 30 years. Around 80 percent of the energy generated can be used directly in the company. Michael Rieken, member of the board of directors of Bohnenkamp AG, comments: "For a wholesale company like Bohnenkamp, energy costs are a significant factor. With the new photovoltaic system, we can now cover around 25 percent of our energy requirements ourselves. We would like to increase this self-sufficiency to 40 percent next year with the planned installation of a second system of the same size. In addition, we are optimizing the internal work processes so that we can use the photovoltaic system effectively. For example, we're checking to what extent the charging of our 60 electric-powered forklifts’ batteries can be moved from night-time to daytime - the time when our system generates the most solar power."

The photovoltaic system is an important milestone in Bohnenkamp AG’s climate protection and sustainability concept. This also includes heating with geothermal energy and the conversion of the hall lighting to energy-saving LED technology.

The new system occupies a total area of around 10,000 m² on the rooves of Bohnenkamp's logistics halls, which were newly built in recent years. The system, which has a total weight of around 150 tons, was already taken into consideration in the planning during the construction of the new hall. It is expected to generate around 700,000 kWh per year. This would be enough, for example, to supply 200 four-person households with electricity for a year or to operate 190 e-cars with a mileage of 20,000 km per year. Alexander Gutsch, from Goldbeck Solar, the company entrusted with the implementation, presents the environmental effects that this system achieves. "The operation saves 350 tons of CO2 annually, equivalent to the energy used by over 70,000 litres of heating oil or nearly 80 tons of coal."

Detlef Gerdts from the city of Osnabrück’s Environmental and Climate Protection Department emphasizes: "This system is a good example of how environmental protection and economic efficiency are not mutually exclusive. If planned correctly, environmental protection measures can also have a positive impact on the economic development of a company. We would be delighted if as many companies and private individuals as possible followed this example. For this purpose, we offer special consultations for companies and also for private individuals .“