On 12.01.2021 Thomas Pott, general sales manager of Bohnenkamp AG, was a guest at the KRONECTED Stream together with our product manager Marlon Lewandowsky. 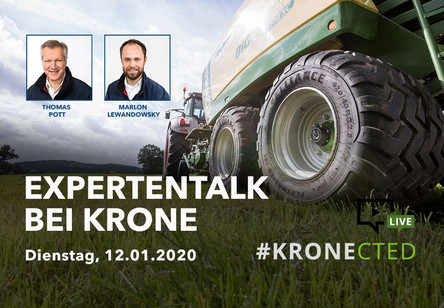 The two specialists provided information about tyres and wheels in agricultural use at the agricultural machinery manufacturer KRONE’s digital expert platform.

"We can certainly only touch on many points in the upcoming thirty minutes", Thomas Pott mentioned at the very beginning of the stream. After all, just teaching the basics about tyres at the Bohnenkamp TrainingCenter takes an entire day and a half. Nevertheless, under KRONE marketeer Elisa Gödde’s moderation, the Bohnenkamp sales manager was able to bring up numerous important and interesting tyre facts. In the stream, they both covered everything from tyre manufacturing to safe and proper use to the end of a tyre's life.

Today, the majority of production is in Asia, China and India in particular having established themselves as tyre exporters in recent decades. The tyre manufacturers there mix up to 45 ingredients into the rubber of modern high-performance tyres. In addition to natural, synthetic or butadiene rubber, the formulation also includes large quantities of carbon black, as well as rapeseed and mineral oils, sulphur and zinc oxide or light-protective waxes. The respective rubber compound depends heavily on the intended use of the tyre. Cut and heat resistance, but also elasticity can be significantly influenced through the right formulation.

The substructure of a tyre, the carcass, also keeps a tyre stable. It can be made of textile fabric, steel wire or a mixture of both materials. If the carcass threads run diagonally along the tread, this is called a diagonal tyre, while cross-ply windings characterise the considerably more durable radial tyre which now dominates the market for agricultural tyres, as the Bohnenkamp sales manager knows. Only older machines would still be regularly fitted with tyres of the outdated diagonal technology.

As the last processing step, the green tyre is baked in a stainless-steel mould, the so-called tool. The time- and energy-consuming process limits the production volume, Pott points out. Today's standard tyre for towed agricultural vehicles spends between two and three hours in the mould, so only eight or nine tyres a day could be produced with one mould. Finally, the finished tyres are subjected to a visual and X-ray inspection and checked for concentricity before they go on sale.

As a relatively new tyre technology, Thomas Pott also presented IF and VF technology, the abbreviations standing for Improved Flexion and Very Improved Flexion. The tyres with low-pressure technology relieve the soil and are now available not only for tractors but also for towed agricultural machinery. Soil protection can thus continue in the trailer combination behind the tractor.

Of all the symbols on a tyre, the indicated fitting pressure is probably the most misunderstood. It is often confused with the operating pressure. However, it is the setting pressure of the tyre which must not be exceeded under any circumstances during tyre mounting. "If the tyre does not settle, do not under any circumstances apply more than the specified pressure in the hope that the tyre will settle in the end. In the worst case, the material will give way", warns Pott. During operation, on the other hand, the setting pressure would usually not be sufficient and the tyre would show signs of premature wear.

Another new feature is a speed and load index that differentiates between the drive axle and the free-rolling axle. The performance characteristics of tyres for the different axle positions are not always the same. In most cases, a drive tyre is designed for a lower load. This should be taken into account when changing tyres.

Is there an expiration date for tyres?

"Old is relative; most tyres are worn bare", Thomas Pott replied to moderator Gödde's question, referring to practical experience: "We see vehicles in service time after time that still have the first set of tyres on after 20 or 30 years of operation". The prerequisite for this is, of course, short service lives; however, there is no fundamental expiry date. Even if so-called ozone cracks have formed in the tyre surface over the years, this does not speak against a substructure that continues to be flawless and robust.

Assortment over the course of time

The structural change in agriculture has, of course, influenced the Bohnenkamp business and also the Bohnenkamp product range. However, new machine dimensions, new speeds or even new plant cultures have produced an immense variety of treads.

However, one tyre cannot meet the growing new demands of farmers on its own. According to Thomas Pott, users can quickly find a more powerful tyre of the same size and tread with a higher load capacity. "But the rim must also grow with it", cautions the tyre expert. He emphasises: "We always see the whole thing as a combination, otherwise at some point even the best rim reaches the end of its life - and that gets expensive, because then usually tyres and also the axle are quickly affected". Marlon Lewandowski had to answer the audience's question as to whether the load-bearing capacity of a rim could be seen anywhere and referred them to dealers and manufacturers. They could access relevant certificates and drawings via the manufacturer's number and provide information.

Thomas Pott also enlightened the KRONECTED audience about damage patterns. "A tyre never forgets" is a common saying in the tyre trade, he said. Some damage patterns, such as dent formation on the flank, sometimes occur after a delay. The characteristic bulges are a sure sign that you have stressed the tyre far beyond its intended load limit. An incorrectly adjusted tyre pressure, on the other hand, leads to an irregularly worn tread. If the pressure is too low, the shoulders will shrink first; the expert will recognise excessive pressure by a comparatively heavily stressed central tread.

"If you keep an eye on air pressure, speed and total weight, you will get to enjoy your tyres for longer", Thomas Pott told the fans of the machine manufacturer KRONE.