The new IF/VF tyre technology performance promise sounds wonderful. Farmers should be able to benefit from better soil protection and higher yields while saving valuable fuel. Together with the agricultural machinery manufacturer Amazone, Bohnenkamp’s tyre experts investigated in a standardised field test what is true about these grandiose statements in the field. 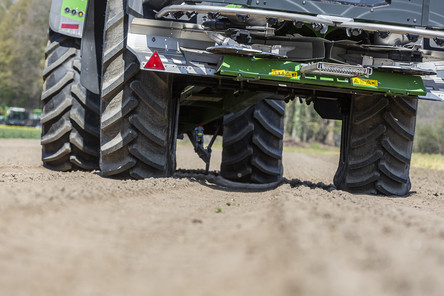 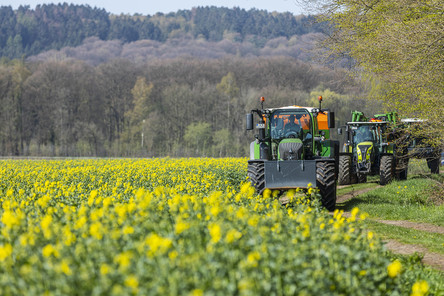 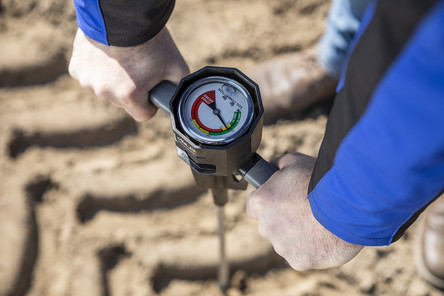 The basics of IF and VF technology

IF tyres (Improved/Increased Flexion Tyres) move the same payload as comparable standard tyres at 20 percent less tyre pressure - or up to 20 percent more load at the same tyre pressure. VF tyres (Very High Flexion tyres) even extend this performance limit up to 40 percent. This is made possible by a modified carcass structure. A larger number of thinner carcass plies give the tyre the flexibility and stability needed to withstand changing pressure conditions and maintain sure-footed traction. If farmers want to avoid excessive soil compression in the field, they can reduce the internal pressure of these products, hence increasing the tyre’s contact area. Before switching back to the road, the tyre pressure can be increased again in the opposite direction so as to save fuel.

Amazonen-Werke H. Dreyer GmbH & Co KG (brand name: AMAZONE) from Hasbergen-Gaste in Lower Saxony provided agricultural machinery and equipment for the field test. As a renowned manufacturer of agricultural and municipal machinery, AMAZONE has for many years been a loyal customer of Bohnenkamp AG for the original equipment of its products.

Out into the field - the direct comparison IF-/VF vs. Standard

The Improved Flexion technology was tested on the towed AMAZONE UX 5201 Super field sprayer. The Very High Flexion technology was thoroughly examined both on a towed AMAZONE ZG TS 1001 ProfisPro spreader and on the self-propelled AMAZONE Pantera 4502H field sprayer. With the Pantera 4502H, the combination of high wheel load with relatively narrow tyres with high internal tyre pressure is particularly interesting. The use of VF technology allows a considerable reduction of the tyre’s internal pressure by more than a third, as compared to conventional tyres.

On the left-hand side of the units, tyres with conventional standard technology were fitted, while comparable IF or VF technology was used on the right-hand side. Before going into the field, the implements were filled under the incorruptible eyes of AMAZONE project manager Timo Klemann, and at the headquarters in Hasbergen-Gaste, the exact wheel load was determined or the tyre inflation pressure was set exactly as specified.

Well-prepared, we went out onto the field in the best of weather. After a period of low rainfall in the previous days, the soil was relatively dry during the field test, which is not trivial for the execution as the load-bearing capacity of a soil type is higher, the drier and the denser it is. Damp and loose soils are much easier to compact.

A clear picture can be seen across all measurement results - especially in the track depth. The Amazone units left a track approximately 25 to 30 percent flatter on the IF/VF tyres - despite a greater or equal measured wheel load. And while the penetrometer reached an average depth of 22.3 cm in the conventional tyres’ tracks, it penetrated 10 percentage points deeper in the looser IF/VF track, averaged over all machines and measuring points. By way of illustration: calculated on one hectare of land area, plants have 220 cubic metres more root space available for nutrient uptake where IF/VF technology is used. The effect of greater soil protection through the use of IF or VF technology is demonstrable and clearly positive.

For Heiko Holthaus, head of the agricultural division at Bohnenkamp AG, the test results were an impressive confirmation of the performance promise: "With the recently created possibility of now being able to equip complete combinations with the new technology, the use for farmers and contract service providers in the agricultural sector will pay off even more. The slightly higher entry price into the technology will now pay for itself even faster through higher yields in the harvest and a significant reduction in fuel consumption". Mr Holthaus is already sensing potential users’ growing interest in the technology, which is proving itself more and more. VF technology represents the medium-term future of agricultural tyres for him. "Those who have already been enthusiastic about the use of IF technology will in future switch to the further development of this technology in the form of VF tyres, and those who are new to this pioneering technology will be more likely to deal with VF tyres immediately due to the economic aspects and will skip the intermediate step of starting out with IF tyres".