Aluminium rims shine out - from fuel consumption through to maintenance

The US brand Accuride’s high gloss aluminium rims have always cut a flawless figure, braving dusty tracks as well as the road salt season. Truck driver Wolfgang Vaak from the Meller bulk goods logistics company Alois Wilken has been driving the Accushield-coated products for nine months now. While his boss appreciates the higher payload in addition to the fuel savings, truck driver Wolfgang is pleased about the low maintenance requirements. 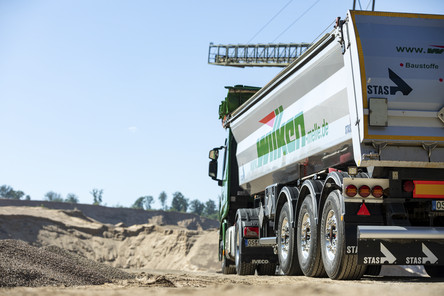 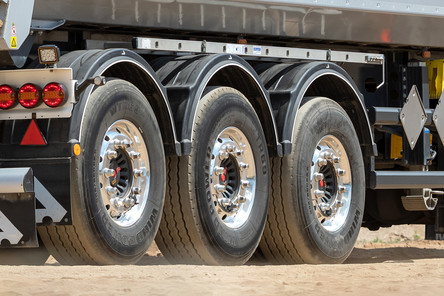 Hundreds of quarries, gravel pits, landfills, and more than five and a half million kilometres of country road and highway - that's Wolfgang Vaak's rear-view mirror has seen. The 65-year-old regularly transports Weser and Rhine gravel, crushed stone, and grit, but also scrap metal and other bulk goods to destinations throughout Germany, the Netherlands, Belgium, and France. On his tours, the truck driver covers an average of 500 kilometres a day, only interrupted by two or three stops at customers and suppliers.

"The old alloy wheels used to tarnish very quickly. Also, brake dust and all other kinds of dirt ate their way into them," Vaak recalls. In the past, the matt rims had to be refurbished using polishing paste. "That cost me and our apprentice a lot of time and money every Saturday," jokes Vaak. Today, the apprentice can carry out more meaningful tasks instead. Thanks to their patented Accushield coating, Accuride's new rims are shiny again even after a normal truck wash. “Afterwards I spray them once with the steam jet and rinse them off with clear water. That's enough to get a spotless shine!"

Even today, Accuride's wheel rims sparkle flawlessly, but the manufacturer’s lightweight products are not just visually convincing. We meet Wolfgang Vaak at the loading station of the Wilhelm Reese gravel works in Rinteln, Germany. While the conveyor belt high above us is dumping cubic metre after cubic metre of rock into the trough, the experienced long-distance driver calculates: "Thanks to their lighter weight, we can load between 200 and 300 kilograms more." And if an empty trip is pending, Alois Wilken GmbH’s trucks save expensive fuel on each trip. The aluminium rims’ lower mass protects the vehicle’s adjoining technical parts and the chassis as well as axles and wheel suspension. "The economic potential of aluminium rims  also  has a positive impact at several levels simultaneously and quickly justifies the somewhat higher entry price", emphasises Mark Sobiech, key accountant for the Truck & Transport division at Europe's leading tyre wholesaler Bohnenkamp AG. He has been observing an increasing demand in this segment for years, and with Accuride as the American market leader for aluminium rims, Bohnenkamp is now also serving the central European market.

Logistics entrepreneur Alois Wilken relies on Windpower tyres to match the challenging terrain. The drive axle bears a somewhat more robust tread (WDR 37); at the front, the tractor unit is rolling on economical WSR 36 Windpower summer tyres and the tipper trailer is equipped with three pairs of trailer tyres type WTR 69+. In this way, Vaak drives his 40-tonne vehicle safely along serpentines and abrasive gravel. "You can't get anything done here with normal street tyres; the tread has to be a bit tougher," Vaak praises the high-traction WDR 37 in particular. A good ten percent of Wilken's truck’s mileage is done under demanding off road conditions, where the tyres are afflicted not only by abrasive rock but also by sharp-edged industrial waste, for example in scrap yards.

So far, however, he has not found fault with the new Windpower models’ puncture and cut resistance. If the brand delivers on its quality promise as expected, the tyres will go into retirement together with truck driver Vaak at the earliest. There are just under 100,000 kilometres and just over a year’s time to go until that moment. But even then, the rims will still be shining.

With almost 60 employees at two branches and around 35 vehicles, the forwarding company Alois Wilken GmbH from Melle in Lower Saxony serves the demand for building materials, natural stone, gravel, industrial products, and scrap metals of all kinds in central, western, and southern Europe. The company's customers include building constructors as well as concrete plants and the steel industry. The logistics specialist has semi-trailer tippers up to 50 m³, side tippers for the transport of bulk material and palletized goods as well as silo vehicles with a capacity of up to 60 m³. On request, portable forklifts are also available on board.

Accuride wheel rims in the SHOP

Windpower tyres in the SHOP